Do you ever not feel like eating after a hard workout? Well you know you need to, right? The first 30-60 minutes after a workout are your body’s prime window for refueling! But sometime the gut isn’t quite on board, so the idea of a meal or solid snack isn’t appetizing.

Rather than missing out on a refueling opportunity, opt for a smoothie. This Vanilla Blueberry Smoothie is thick and creamy and delicious – and best of all, it covers your protein & carbohydrate needs after a workout.

The key to making a good smoothie is having a high-power blender & making sure you like all of the ingredients on their own. What good is it to throw somthing together if you don’t even like the building blocks? I used almond milk in this smoothie because you’re already getting a great amount of protein from the protein powder, so there’s not need to get extra protein from milk. Calorically you’re also already covered, so unsweetened almond milk is a good option.

Not all almond milk tastes the same, so experiment until you find the one you like. I personally love Kirkland’s Unsweetened Vanilla Almond Milk. It’s also shelf-stable before opening, which is an added bonus.

The added oat bran & blueberries take care of your carbohydrate & antioxidant needs, and the whole thing is just damn delicious, so it’s a win-win-win. This recipe makes enough for 1 large smoothie – or 2 smaller ones if you’re feeling generous and want to share with a friend. 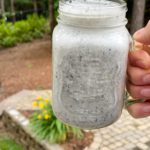 This smoothie totally hits the spot when you don't feel like eating after a hard workout - or just any time you want a delicious and filling snack.
Prep Time5 mins
Course: Drinks
Servings: 2
Calories: 210kcal